The incredible story of a bespoke kitchen extension

We met Neal and Courtney who renovated their ‘ugly duckling’ property into a modern family home which now radiates with natural light, thanks to Vario by VELUX. After buying the property late last year, they overhauled it so that they could provide their growing family with a home that met all of their needs.

The family went for a modern and minimalistic style with rooflights that give their home an open feel, bringing the living room, kitchen and dining areas together with natural daylight. The end result added energy to their aesthetically pleasing design. The vibrant daylight shines through their rooflights and bounces radiantly off of their white walls, creating a unique and relaxing home environment.

Tell us about this house, what motivated you to re-build and entirely renovate it?

Neal - “We were looking for a place to buy, we viewed this place and when we walked around it was quite dated. No one had lived in it for a good year and we wanted something that was a doer-upper to put our own stamp on it. For me, I thought it was way too much work. However, Courtney turned around and said: this is the place, that is our home.”

Courtney - “We wanted an open concept feel and yeah, it was bad and needed everything gutted but it was just the right space and I could see the potential straight away. We couldn’t find anything that could work, so we knew we were going to take on a project and renovate a house, which was always something I wanted to do.”

Neal - “I thought we would do a kitchen, bathroom or maybe a couple of bedrooms, not an entire house! We knew this house needed a lot of work but only after we bought it and as we went into the details it escalated out of control.”

What was the greatest challenge when it came to the project?

Neal - “We knew the house needed a lot of work when we bought it. The greatest challenges were Courtney being pregnant, both of us having full-time jobs and building it in a pandemic - and all the issues that brought with it as well.’

Courtney - ‘We knew we were going to take on a project and always wanted the chance to renovate our own house but COVID-19 was something that no one could have predicted.”

What has been the biggest joy now that the project is finished?

Courtney - “It’s definitely been this space, the kitchen, dining and living room area is where we spend all of our time, we just absolutely love how bright and light it is and it just functions so well. We can just be here together as a family in this space, it’s amazing.”

“I couldn’t believe it when we walked in for the first time and the rooflights had been put in. There was so much light in the middle of the build when we had no electricity and it was just perfect daylight. It was incredible.”

Neal - “My favourite spot is definitely the kitchen and dining area. With the light and space, we spend a lot of time here each night with our daughter Ella. Then in the evening we can watch TV or read a book and it’s a place where we can relax and enjoy our home.”

This is a big renovation, how have you created different spaces yet still connect them to each other?

Neal - “So it is quite a large extension we've done and we wanted to have an open field, but also close certain areas off. So we've got our kitchen and dining room which is also a great space for the kids to play in while we cook, read a book or watch TV.  And although we wanted our living room connected, we also wanted it zoned off and separated. Hence why we went for the double-sided fireplace, so it’s open on both sides so that it still flowed from our main area out here. But when you're in there, it still feels separate enough.”

“Most people usually put their slimline windows as close to the bi-folds as possible. We did the exact opposite and we tried to push them as far into the house as we could, to get as much light into the middle of the house, where it would traditionally be very dark because there was just no light reaching it. I think it's worked brilliantly in the space and by having two windows it defines each area a little bit better and looks really good.”

Why did you choose Vario by VELUX?

Courtney - “One thing we really loved with Vario by VELUX is that it is a bespoke custom rooflight that was designed specifically for our space. So the measurements of the window to the placement of the window just suited our build perfectly, which I think was really important.”

Neal - “I really love the build-your-own configurator on Vario by VELUX’s website. The way we could manipulate and change it with the sizes that suited our build but also to fit in with the budget that we had for the build was great. And that was how we were able to determine, along with other factors, that we wanted two windows and that we wanted the size that we ended up with.”

How did you feel for the first time when you walked into this room and the rooflights were there?

Courtney - “We’ve been surprised at just how much light comes into this space, it’s just so bright even on the greyest day, it’s unbelievable really. The light in this house is incredible”

Neal - “The difference the rooflights make to a space like this is massive. With the house being quite deep, to not have them and have a dark area in the middle takes away from what we have now.”

Courtney - “We wanted an open concept house where we could have a massive island that everyone can gather around - we knew we’d be spending a lot of time in this space. We wanted the outside to come into this space so we knew we needed to get a rooflight system to get as much light into the middle of the house as possible but we also wanted it to be aesthetically pleasing and to look great."

Neal - “The light that was drawn in by Vario by VELUX was amazing.”

How does the light transition during the morning, afternoon and evening?

Neal - “We get the morning light first thing while we’re having our coffees and then we get continued light throughout the day and even late in the evening.“

Courtney - “Even on the shortest days in the winter it still feels like the days are a lot longer than in our previous houses because the space is just filled with light from the second the sun rises until the late evening. The light bounces on our white walls and it’s just beautiful.”

What does the daylight mean in your home for you and your family?

Courtney - “Daylight was always really, really important to me, I struggle in the dark winters here. So whether it was talking to the electrician, about lighting, or windows, we just knew that it was going to be a paramount part of our design. Getting as much light in as we could make the dark winter days not seem so dark and long.” 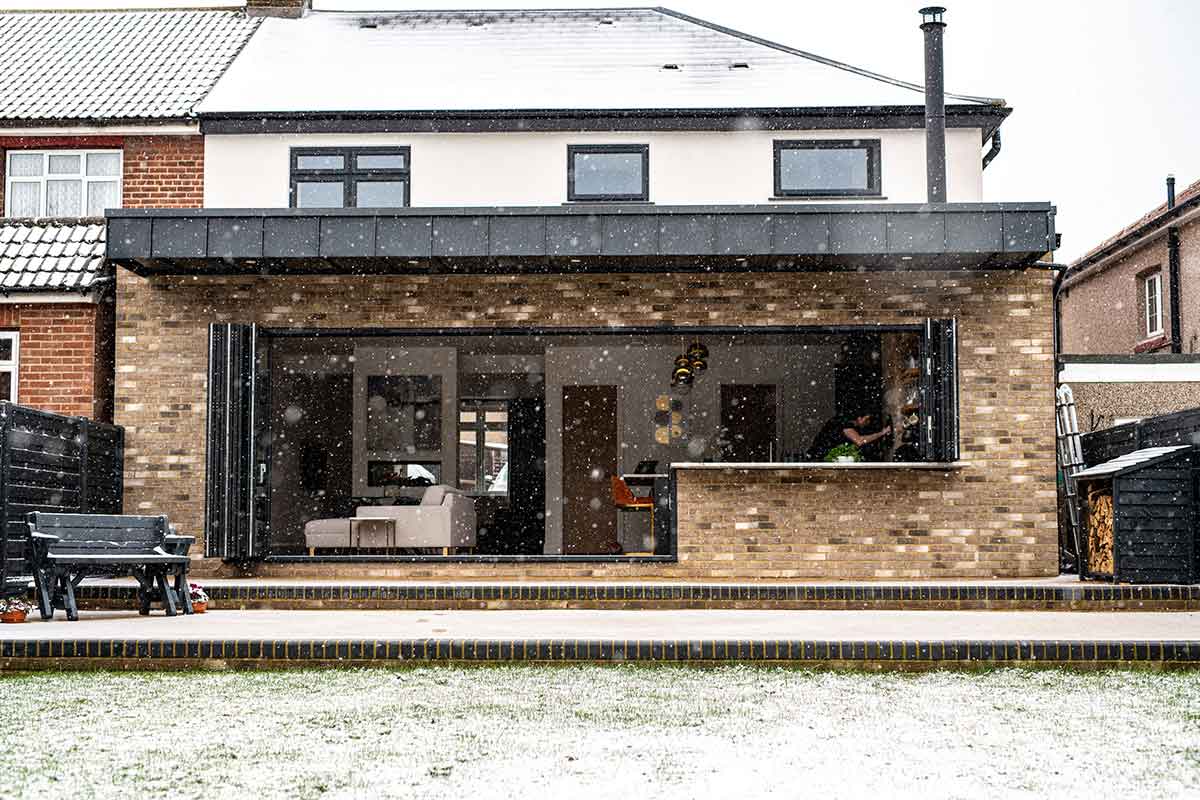 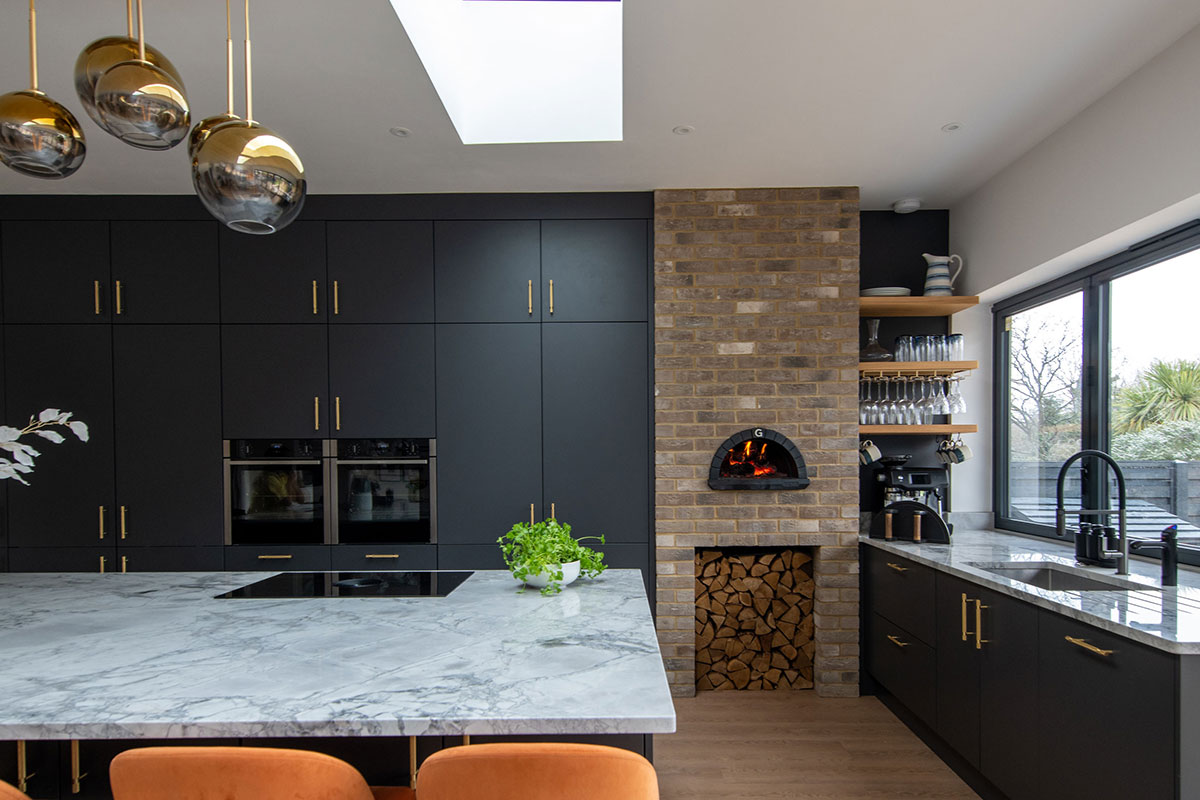 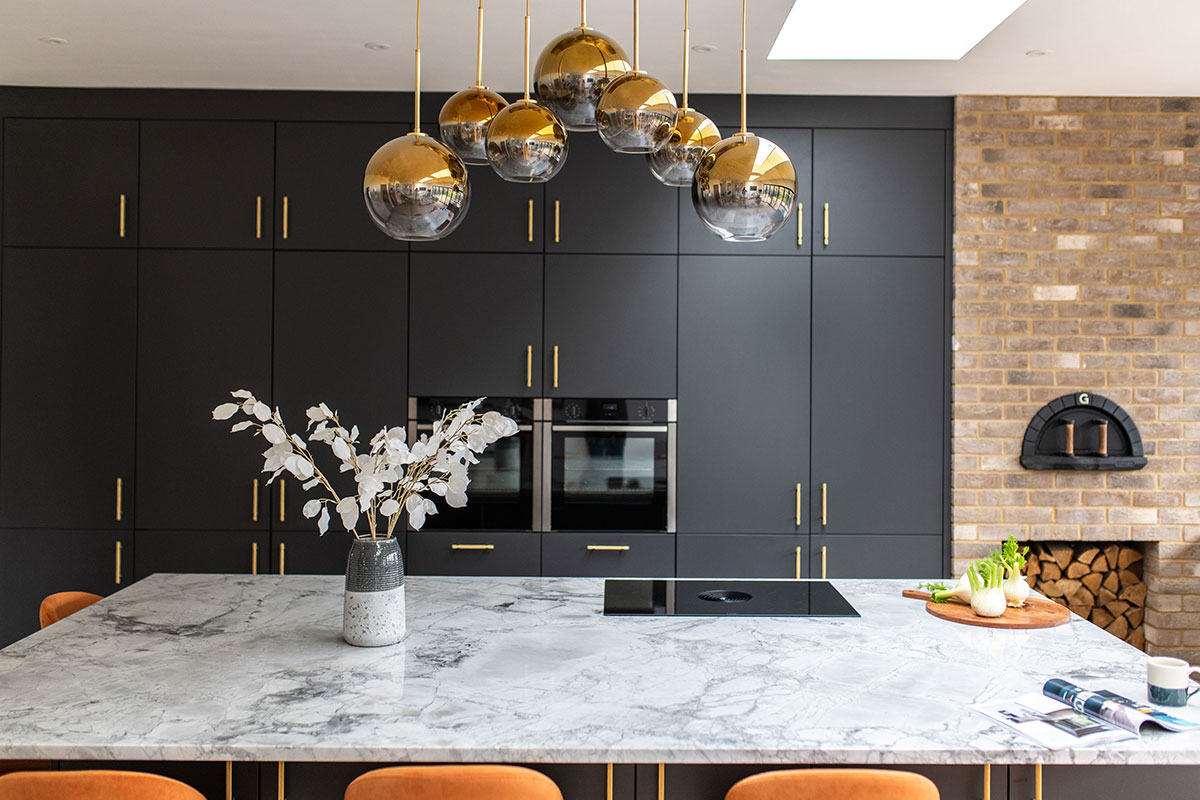 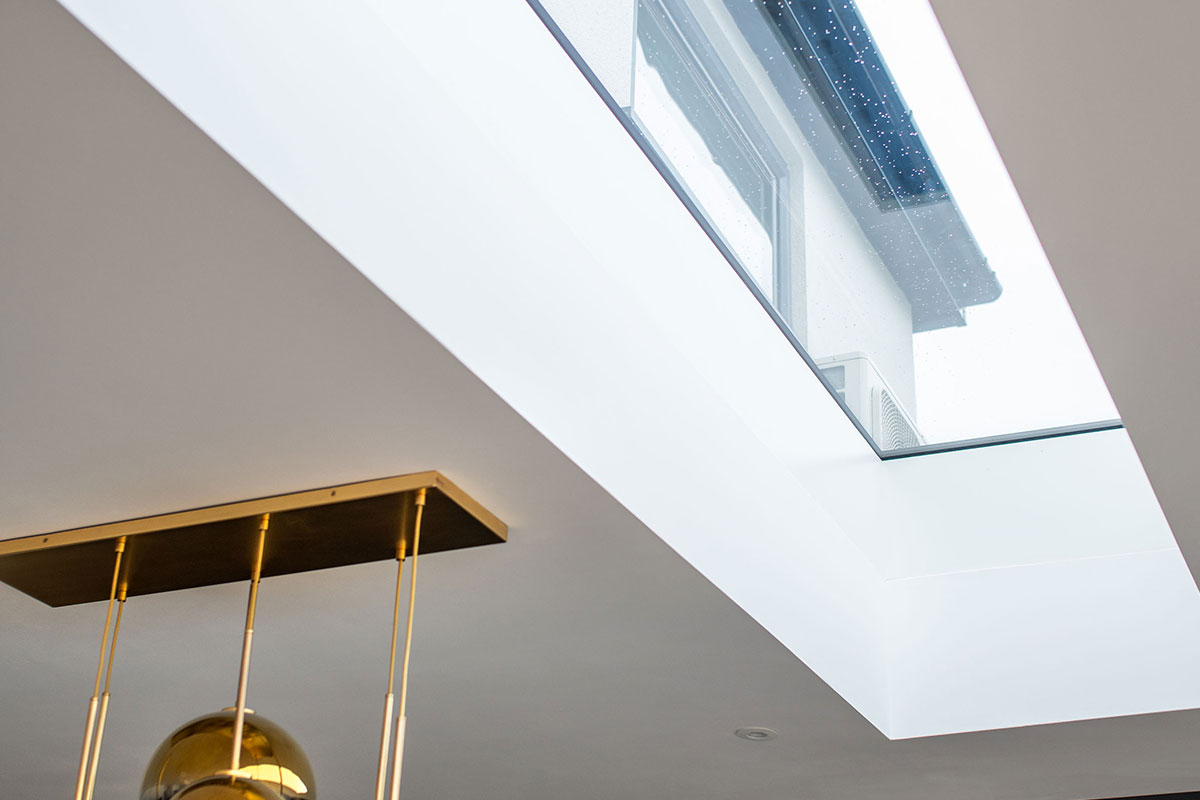 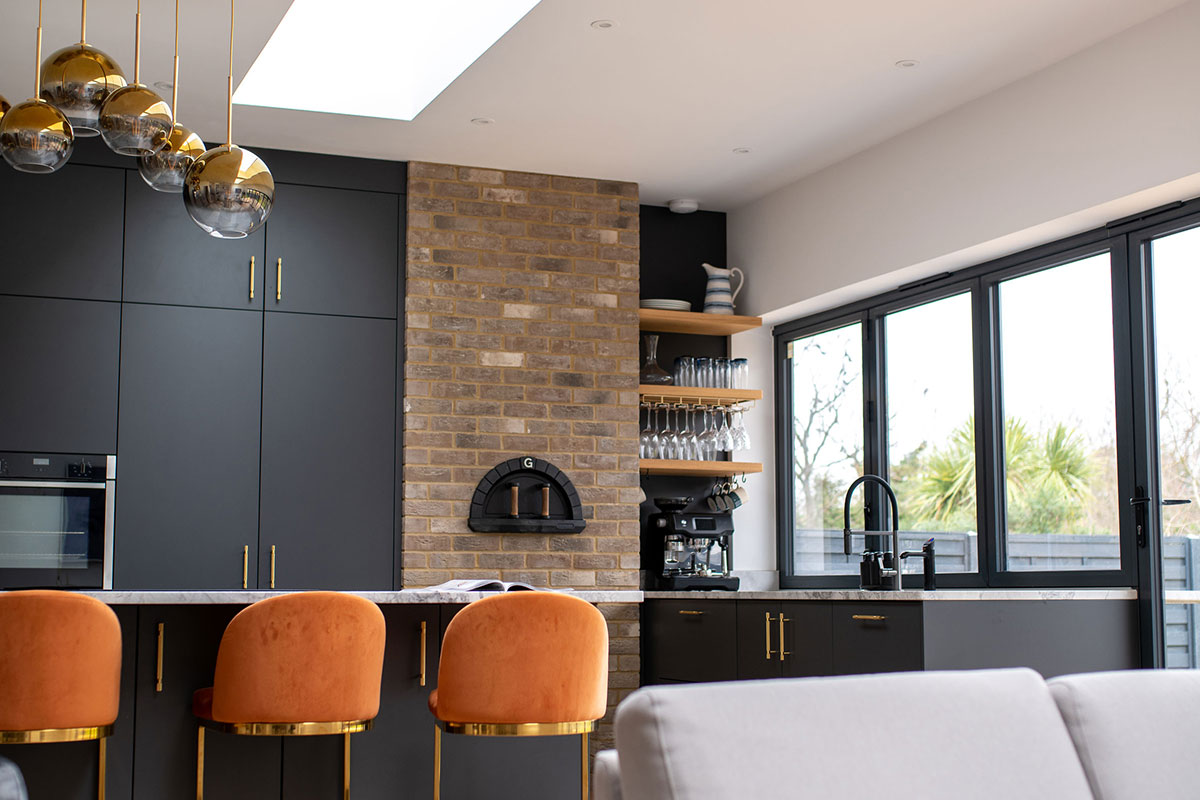 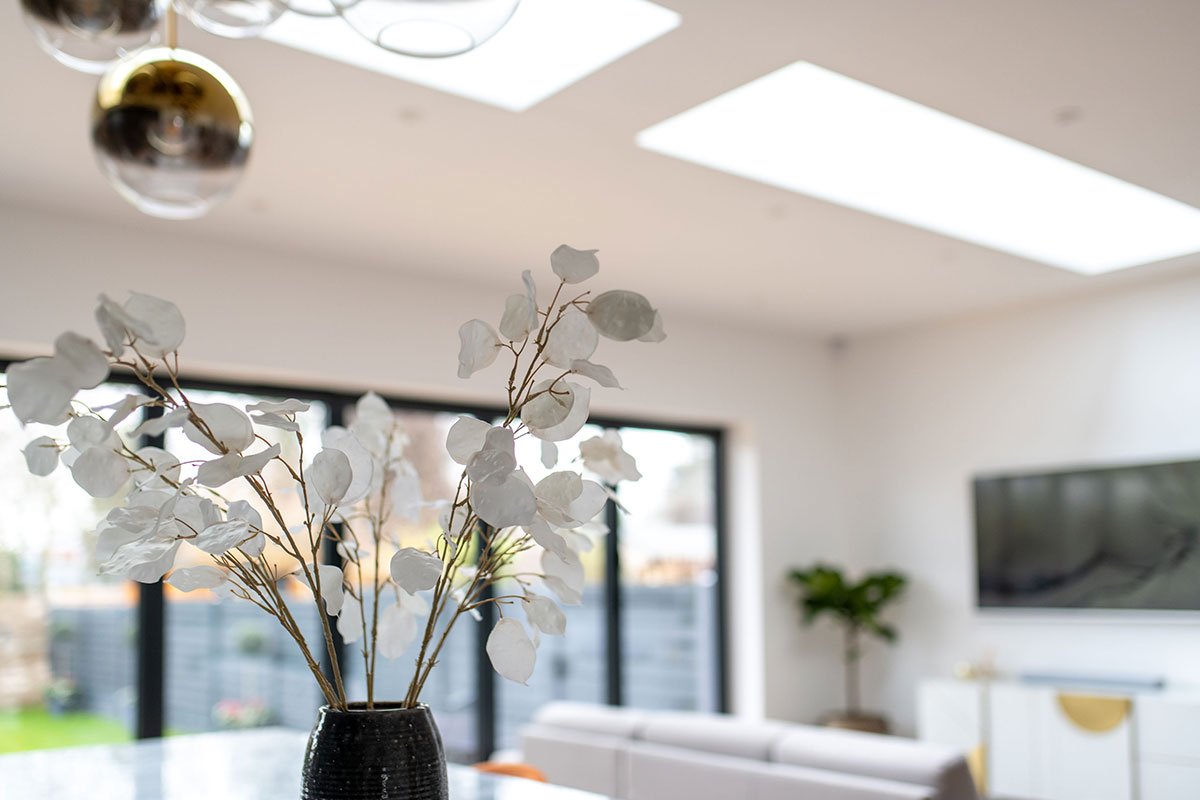 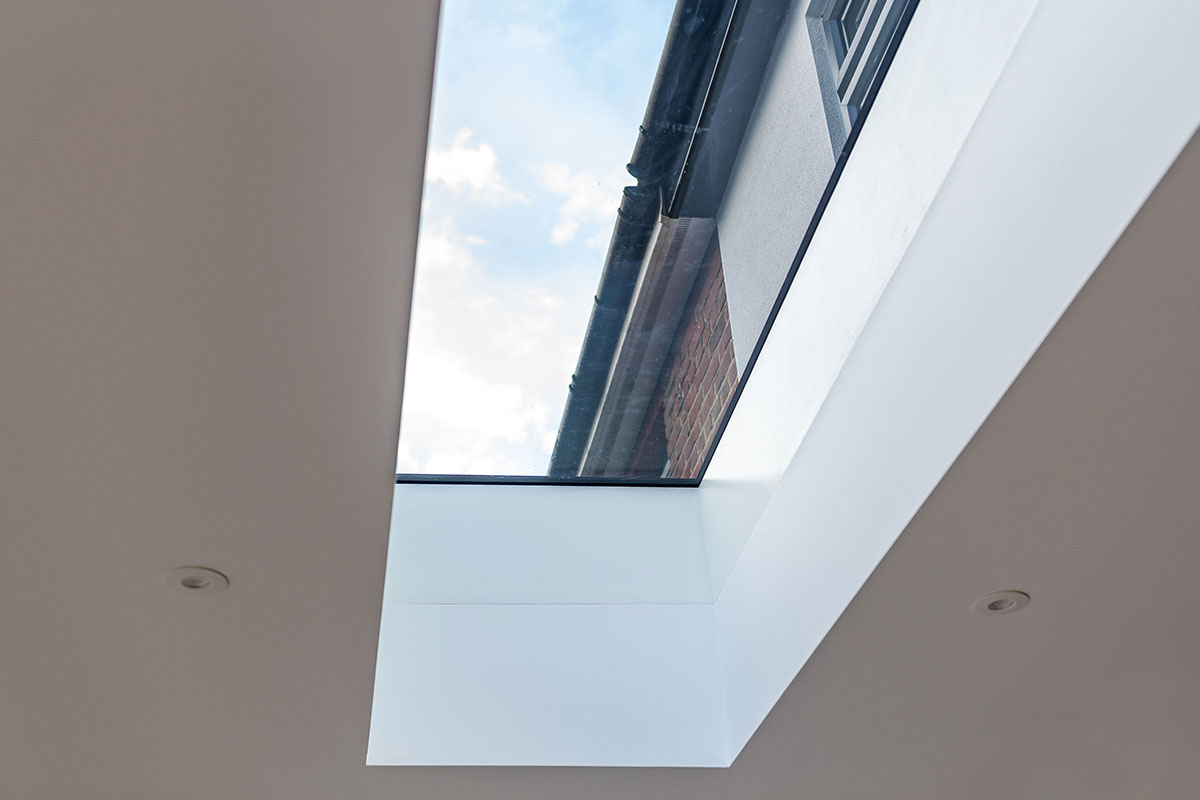 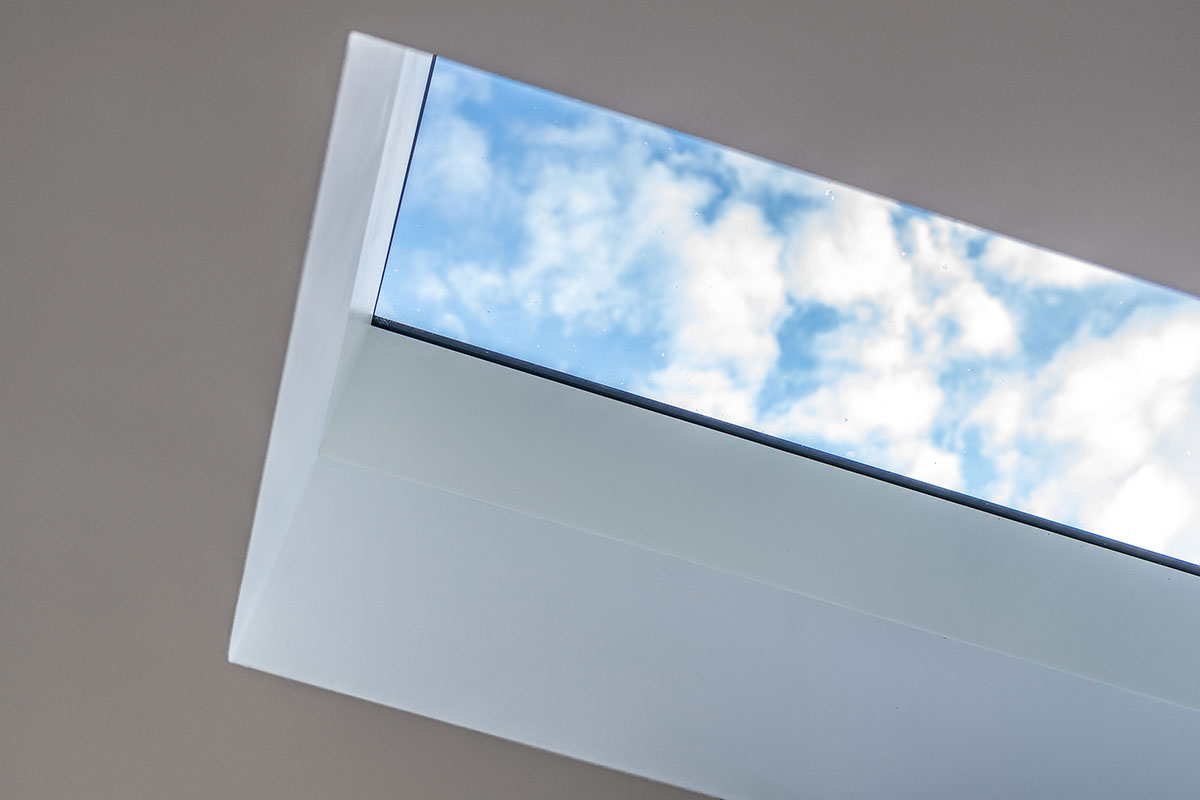 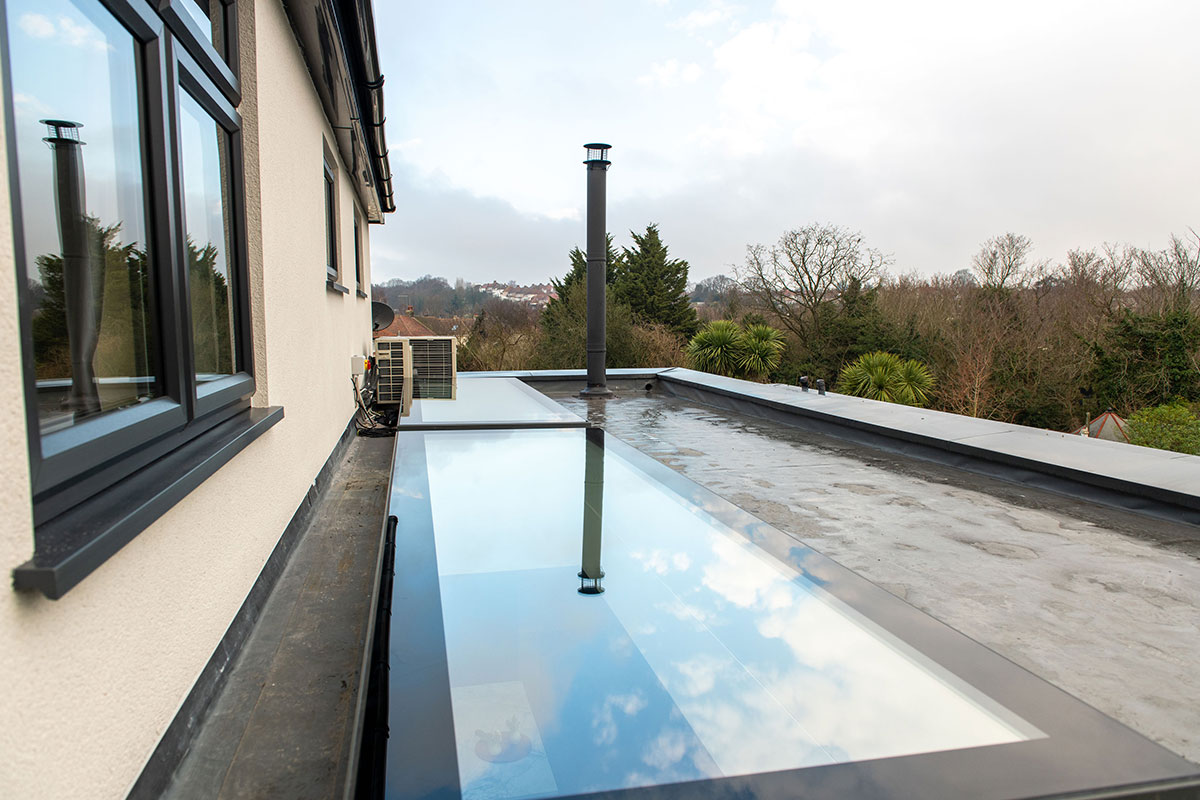 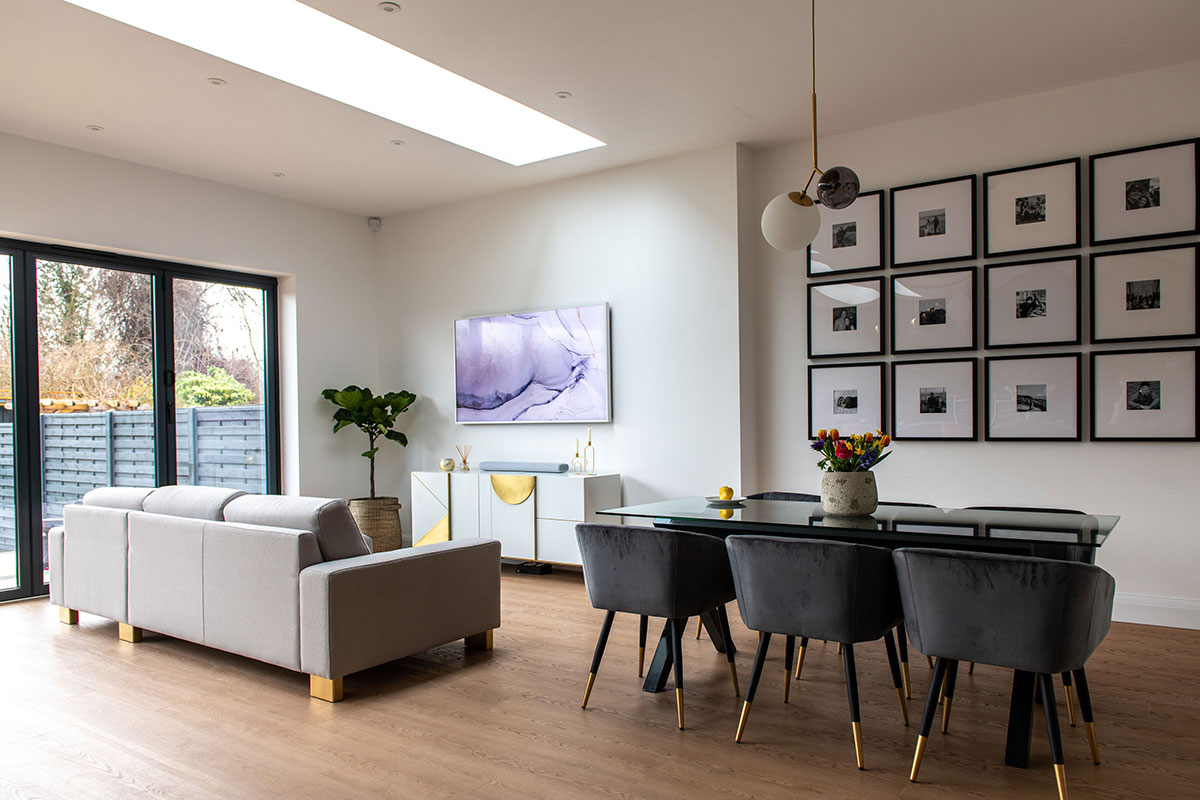 View all
A Nordic funkis villa including four bespoke rooflights
Two opening rooflights in a kitchen extension
Undertaking a full home renovation project in 2 phases
Seanics - a new way to experience the open water
Tranforming an old beauty into a modern home
Jessica's Golden Side Return Extension
Light that creates smiles - How a rooflight rejuvenates a living space
The sky and stars in a loft-converted master bathroom
Replacing old and pointy with modern and sleek rooflights
The Incredible Story Of A Bespoke Kitchen Extension
Stacey and her bright Edwardian house side extension
Morten and his perfect roof-terrace extension
Holloway and Holloway Architecture Studio, London, The Unlimited Rooflight
The Square Rooflight in a rear extension
Sally, Surrey, The Rectangular Rooflight
Maya, London, The Rectangular Rooflight
David, Newcastle, The Square Rooflight
Amir, Bolton, The Long Slim Rooflight
Get your own bespoke rooflight
Call us today +44 (0) 1592 778 246
We're here to support you with your roof renovation & rooflight design and purchase in any way we can. All you have to do is ask our daylight experts!
Follow us